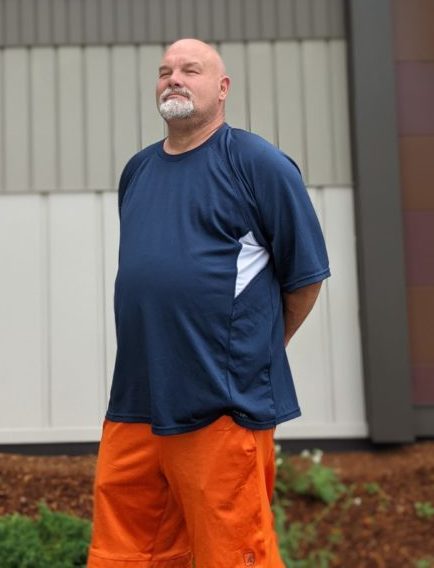 It became clear, upon meeting John Parent, that he was a force to be reckoned with.  A walking enigma.  A person as genial as he is strong, as joyful as he is serious.  John will tell you his story is important and he’s eager to tell it.

John grew up across Lake Champlain in New York state.  After serving in the U.S. Navy, he moved to Vermont with his wife and kids.  Here he sat on the Board of Directors for Head Start and started a program in the Burlington jail that would allow an inmate to read and record a story to their child and then send that recording and a copy of the book home to that inmate’s child.

The next chapter of John’s life brought him to the lowest of lows.  Addiction took over his life.  He ended up living on the streets, trying to eke out a life in several states.

That’s where he became connected with Pathways Vermont. John met Marc Price, who runs our Supportive Services for Veterans Families.  “Supportive Services for Veteran Families did all of this for me. I ended up being put at the Comfort Inn which was like the Hilton for me.  I enjoyed it but since day one I’ve been clear I don’t want that life. I’ve been in and out of motels and been homeless for six or seven years.”

In May, John Parent moved into a permanent apartment at Juniper House.  “This place here has changed my life. The whole program I’ve got, my coordinators are my front line support. They are my heroes. They have gone above and beyond what they were required to do.  It’s Karen, it’s Jen, it’s Abby, it’s Marc.  All the other organizations that they deal with.  If it wasn’t for them I would be homeless.  I’m blessed that I have this place.  This is a brand new apartment.  No one has ever lived here before. Not many people can say they were the first person to take a shower in their shower.”

As John gave us a tour of his new apartment and building, it quickly became clear that John has earned his title of “The Voice of Juniper House”.  Everyone knows his name. He even planned the building’s Fourth of July community event. In addition to party planner, John has a small garden box in the community garden and is growing tomatoes and pumpkins.

As for the future, John hopes to contribute more to Pathways Vermont and transition from being a client to being a volunteer or even a board member.  “I’m just now getting into settling down here.  I want to start doing some peer groups and getting out and talking to a lot of people.  If people don’t hear it from people who have lived it, it doesn’t come out sincere. I have lived through some really hard times. I’m still here, and I’m still going strong.  If I live as long as my parents, my mother is still alive, she’s 87… so I still got 30 years to go.”