Home > Our Blog > You Could’ve Just Worn Your Converse 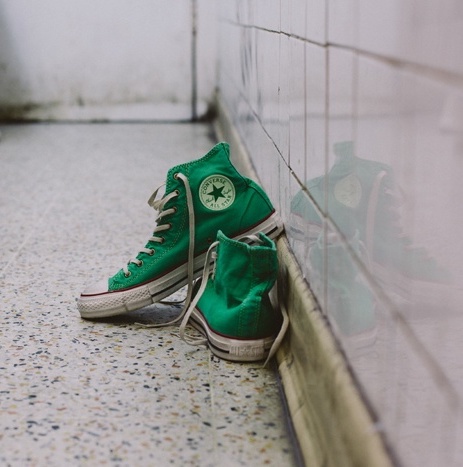 In February of this year I celebrated 10 years of working at Pathways, and in June I took on a new role as the Assistant Director of the organization.  These two milestones have gotten me thinking about why I work at Pathways – and what about the work is so enduring.

It was a warm day in late summer of 2011 and I was speed walking down a midtown Manhattan street.  I was sweaty from that hot breeze that whips through the subway. I was anxious.  I was meeting a woman named Hilary Melton, who at the time I knew little more about than her inviting blurb on a bare bones “Pathways to Housing Vermont” website.

I was dressed in a black suit, the same suit I’d worn to my father’s funeral the year before.  I was wearing beat-up green Converse sneakers – my favorites – and arrived early to the lobby.  I sat down and quickly pulled off my comfortable sneakers, switching to a pair of heels I’d purchased for that same funeral.  I took a few breaths and prepared to interview for a role at Pathways.

In the interview, I shared with Hilary all the reasons why I thought I’d be a great fit to lead her new Housing First team in Vermont.  I shared about my commitment to ending homelessness, my disillusionment working within the NYC shelter system, and my Master’s thesis on the commodification and dehumanization of the issue.  I performed the best version of “I’ve got it together” my 23 year old self could manage.  I was the neatest, cleanest, most professional version of myself I could be.

A few months into working at Pathways, I was getting a crash course in learning how different this organization would be.  Housing First was about housing, sure, but more than that it was about listening to each other – and honoring each other for who we are and what we want.  It was hard work, messy work – and it required constant self-reflection.  Who am I? Why am I showing up this way?

I was doing my best to trod through these questions – at Pathways, in therapy, and in my relationships.  It’d been just over a year since my dad had died by suicide.  My whole family was grieving in that complicated way that families do – made all the more complicated by the circumstances of his death.  To others, we were calling it an “accident.”  In reality, it was anything but that.  The grief and the secret – and the shame that comes with secrets – were all tied up together for me.  On top of that, I was working through my own complicated relationship with the medical model, psychiatric labels, and medications.  I was grappling with how I fit into this world – simultaneously resisting “sick” labels while also taking comfort in them.

At Pathways, people were talking about their experiences.  All of us were.  Participants were sharing their stories, agency leadership were speaking out about some of the same struggles.  In spaces we shared, people were coming up to me, saying “thank you for saying that – I’ve never shared this but…”  I started to see pieces of myself in those stories, and it made it a little easier to bear my own.

Hilary and I and others at the organization were trying to figure out how to support each other to be in relationships in this unique way.  A new organization came to Vermont to offer a training called Intentional Peer Support. Hilary and I attended – it was the closest thing we’d found to what we were talking about. We decided to train everybody at Pathways.

Around that time, Hilary reflected to me on her experience interviewing me for Pathways.  She was an “always-early” person herself, so she’d watched me come into the lobby and change my shoes.  She said offhandedly,  “you know, you could’ve just worn your Converse.”

You could’ve just worn your Converse.  That was a lightbulb moment for me.  It was an invitation: to show up as your whole self, however messy and tattered that might be. To bring the big-picture of who you are becoming, and show up authentically, humbly, and full of hope.   Somehow, it felt like a revolution.

On a hot summer night in 2013, I got a phone call. There was a fire at one of our apartment buildings.  My mind immediately went to one of the tenants: a client of ours, who I’ll call Mark.  Mark had been referred to us by the local designated agency, where they weren’t sure how to continue to support him.  They’d supported him in lots of temporary settings – in group homes, in  motels, in shelters – the story was always the same.  Mark, they said, could not maintain his living space.  His spaces would quickly become cluttered with trash, cigarettes, dirt and grime – and he’d be asked to leave as the conditions became unsafe.  He inhabited spaces, it seemed, as though he had simultaneously been there forever, and as though he didn’t live there at all.

We gave it a try anyway.  We talked with Mark about what would be expected of him as a tenant, we found him an apartment, and he moved in.

At first, it was more of the same.  Early visits were spent on hands and knees, scrubbing endlessly.  Every visit we made a habit of first taking out the trash.  We talked a lot about what it meant to have this space, his space, and what it would take to keep it.  It was hard to know if it was working.

A few months in, something shifted.  I visited with Mark and he met me at the door, welcoming me in – different than his usual holler to enter from the other room.  The floor was swept.  He’d placed some trinkets out on a dresser.  It wasn’t perfect – it was still messy, but it was authentic. It was home.

Back to the Friday night phone call, there was a fire. I didn’t know what else to do – so two of my coworkers and I drove to Mark’s.  I don’t know if you’ve ever seen a building actively burning to the ground.  It is the kind of thing that sticks with you. The smell, the smoke in the back of your throat, the heat even from a distance.

Everyone was safe.  But the building wasn’t salvageable.  For a while, Mark and I stood there, watching the fire.  Reality sunk in that he wasn’t going back home.

As we walked back to the car with his groceries, he stopped in the parking lot.  He turned and looked at me – and so earnestly, really caring to hear my answer, he asked “How are you doing?”

Flash forward to February 2020. It was the day after a major snowstorm and a few feet of snow covered the ground. I was 34 weeks pregnant and as I pulled into the parking garage by our office the parking attendant joked if I’ll make it to term.  I climbed the steps to our office and sat down at my desk.  My water broke.

9 hours and an emergency C section later, a group of doctors were telling me my daughter in the NICU didn’t look as they’d expect.  Her vitals were OK but she wasn’t waking like the other babies.  It could be a million things.  She was visited by specialists, there were many tests. Eventually, genetics came and we had our answer in a rare genetic disorder.

I thought about my Converses – and remembered Mark.

In between my visits to the NICU, I found myself trying to put in some time with Pathways. Trying to figure out how to support my coworkers who are all out there supporting everyone else.

We started to offer co-reflection every day.  Co-reflection is a space we give each other to connect and think about what we’re doing in our relationships.  A group of us met virtually, since the world had locked down and we couldn’t be together.

A lot of the time, we didn’t know what to say.  The landscape was changing every day. We knew one thing.  We made it a point to ask each other, earnestly, really caring about the answer – “How are you doing?”

So what about the work is so enduring? Why am I still here?

Recently, a coworker was sharing with me about the impact working at Pathways had on them.  They said, in effect, it has been a space to heal, transform, and to be accepted just as they are.

I have dedicated so much of my life to trying to understand the concept of home – what it is, and why we fail to give it to each other.  But isn’t it just that? A space for healing, transformation, and unconditional love.

There’s another thing – there’s work to be done and at Pathways I am surrounded by people who care to do it.

I wish I could say it was getting easier – but really, the issues just keep expanding. 10 years ago we were talking about mental health stigma, the value of peer support, community based alternatives to institutions.

Today we’re…truthfully, still talking about all of that. But we’re also talking about safe consumption sites, Pathways developing property into housing, using psychedelics to process trauma.

The questions keep getting harder. The landscape is constantly changing.  Sometimes the whole house burns down in front of you. But in conversations at Pathways, I never hear someone shy away from a problem.  It’s never “that’s too hard,” or “that’s not what we do.”  We are forever attempting to rise to the next challenge.

And of course we are – because it has never been about the particular problem. It has always been about each other. Our commitment to one another, and to the community we want to be in together.

So, over a decade later, and for the foreseeable future – I’ll be here at Pathways.  I’d love for you to join me.  If you’d like, wear your Converse.