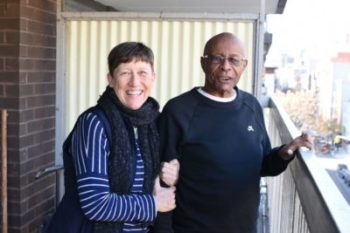 Hughes called me to wish me happy holidays. He has called me every December for 25 years. When I answer, we chat. He asks about my son; we talk about the weather, the ice storm in New York City or the snow in Vermont. I always send a holiday card, something cheerful with barns and cows, and I include a picture of my son.

That year, I had moved to New York City from Boston when I was accepted into a writer’s workshop led by Ntozake Shange at the 92nd Street Y. I got a job at a drop-in center (called the Independent Support Center (ISC)) next to Grand Central Station housed in St. Agnus church.

St. Agnus church was a place where hundreds of people came to get a meal and line up for the limited number of beds in church basements around the city that were available each night. Anyone who didn’t get a bed at a church, could stay inside at the center, but they couldn’t lay down. There was a NYC zoning ordinance that stipulated no sleeping, so people had to prop themselves up in seated positions and doze as best they could. Staff would walk around waking up people who slumped over.

ISC was a new program specifically for folks experiencing mental health challenges. It was located up two flights of stairs and in the back of the St. Agnus church, away from the crowds. It was cleaner than the main space. It had its own shower and fewer people. We didn’t hang a sign that said “mental health services,” but people knew. When I look back, I think someone had to be very brave to walk in.

Hughes was not from the south, but “southern gentleman” comes to mind with his “ma’ams” and “sirs” and general politeness. He was always neatly dressed and his bags were organized and contained, not like some others who came with garbage bags full of things they dragged from place to place. Hughes read the paper, drank coffee and talked about what was happening in the news.

I am not sure why, but people have always seemed to feel comfortable telling me personal things —hard things—and secrets. At the center, I am happy to listen; it makes me feel useful. At the very least I can sit and hold their pain with them, if only for those moments. Hughes was different. He had an impenetrable wall of silence around him and a polite smile on his face. I suppose different people have different ways of getting through the hell of being on the streets.

One day on my way to work, walking through Grand Central Station, I noticed a figure sitting on bags against a grey brick wall. I was running late and in a hurry and didn’t give it a second thought, at least not a thought more than the dozens and dozens of folks sleeping out on the street I passed every day. I saw the figure again the next day, and again, the next. A regular fixture in the same place, almost always in the same posture. I made a point after a week or so to walk a little out of my way and pass directly in front of him.

Yes, it was Hughes. He didn’t see me, his eyes were closed. His was sitting very tall, very straight, with hands loosely folded in his lap.

It hit me very hard that this was where Hughes was living. That hallway, that wall. That 3 feet by 3 feet space. His bags and his erect posture. Hours and hours, days and days, months and months.

In 1992, I was recruited to work on a pilot project started by Dr. Sam Tsemberis. We rented apartments and invited people labeled “severe and persistently mentally ill” who were living on the streets of New York City to move in. We didn’t require anyone to fill out forms or require that they receive any sort of “treatment.”

Hughes was one of the first tenants. He was particular about where he wanted to live; which neighborhoods were acceptable and which buildings. We showed him apartment after apartment and he turned them all down. I could hear myself screaming in my head, “Oh my god, take the apartment! Take the apartment!” Finally a creative realtor we knew was able to finagle a very nice apartment in a high rise building with an elevator and a reception desk — Hughes loved it and moved in.

Last week I was in New York City and stopped in to visit Hughes. He turned 77 this past summer, and this coming March, he will have been in his apartment 25 years. Hughes pointed out the pieces of furniture he still had from when he moved in: a coffee table, a side table, a dresser. And his new bed from Walmart and new television with a rabbit ear antenna the building maintenance man helped him set up. Birthday decorations his neighbors brought him in July were still hanging on the wall.

We talked about his brother and nephews, the news, our favorite Christmas movies, and his daily walk around the corner for coffee at the nearby Dunkin’ Donuts. When I left, Hughes walked me to the elevator and we hugged goodbye. The elevator opened and was full of his neighbors heading to the lobby. They all waved at Hughes. On the ride down, one of the woman behind me said to another woman, “He is such a nice man.” And another woman (who was deaf) standing to my left signed and made a heart shape with her hands —and everyone in the elevator nodded.