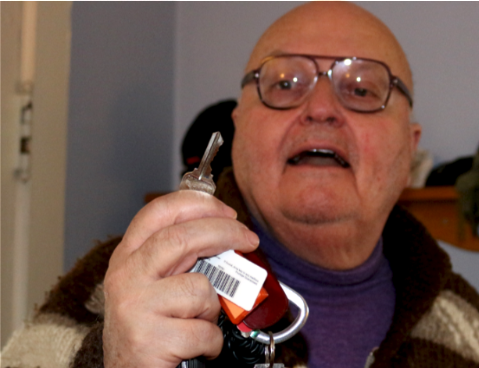 “I think it was some sort of miracle that I ended up here, because I don’t know what would have happened otherwise. They’ve been very understanding what some of my strengths and weaknesses are. But it’s been up to me, I haven’t been enabled. They’ve given me potential directions to go in and it’s been up to me to follow through. They don’t let me get away with any guff, which is the highest compliment I can make. Right now I’m in a strong position because I’m in such a stable place. Now I’ve got all of these legs and bridges and friends and people, a nice little town. There are all these things around me that I haven’t had in ages.”

Lachlan’s life came to a point of crisis in his mid 40’s. A successful career in Europe slipped away when things started breaking down. It was during this time that he was diagnosed with bipolar disorder. He was forced to sell his business to pay of his debts; periods of mania led him to spend more than he made. He considers himself fortunate to have been able to return to his family in the United States, who were able to provide him with support and love. The next 20 years of his life were wrought with instability, he struggled to find a sense of balance and experienced multiple hospitalizations, usually following an attempt to take his own life. Sometimes he was able to find part-time work as a caretaker, but the unpredictable nature of that line of work only contributed to his stress and kept the sense of “recovery” he was working towards out of his grasp.

“I was forced to go into a homeless shelter, there was nowhere else for me to go to take care of myself properly after hospitalization. I was homeless for almost a year and my time in the shelter was running out.”

Lachlan decided something had to change. He decided to move to Montpelier and stay with friends who helped him get on his feet. He found some part time work as a caretaker and moved into the Emerson Bed & Breakfast in Vergennes. Unfortunately, this new life he was building was in jeopardy: ”It became simply too expensive. There wasn’t enough income. So one day, representatives (from the local shelter) were there talking to someone in a similar boat.” The shelter worked to connect Lachlan to resources to restabilize his life, including Pathways’ Housing First program. With the support of a housing voucher, we were able to identify housing for Lachlan that was affordable on his fixed income; a quiet, well-maintained apartment in Vergennes: “I live modestly, but very well. I’m in the most stable position I’ve been in probably in 20 or 25 years, which is for me the most important thing. Since I was diagnosed I haven’t had such a stable, non-turbulent position.”

Lachlan is making a home for himself in Vergennes. He can practice speaking French with a restaurant owner down the street and has created a network of supports that make sure that he has his health in order and his fridge fully stocked. He’s even found a long-term position as a caregiver for a woman through the local mental health agency. After a long journey, Lachlan has finally found the sense of stability he was seeking.

”It means not having to be without housing, without proper food and nourishment, having support groups, but having my own space. I haven’t had my own space. I’ve lived in SRO type situations, not a bad thing, a lot of people do it and have to do it, but this is just the best thing ever. Because I can come and go as I wish. I’m working again which is good for me, I am actually helping another person, that’s a good thing.”