Home > Our Blog > Shoot For The Moon 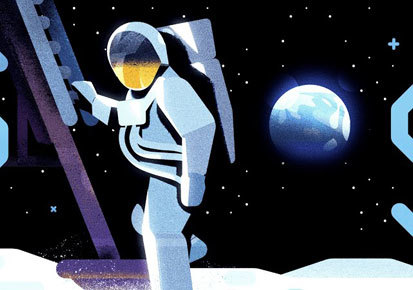 A few weeks ago my colleague Rebeka pointed out the Google Doodle about the 50th anniversary of the Apollo landing. She told me it was heart-warming and brought tears to her eyes. While I am a notoriously sappy person and will cry openly at most things including those tug-at-your-heart-strings Kodak or Nike commercials, when I was watching the Apollo Google story, all I felt was an irritation. What happened to me? Am I getting more cynical as I get older? Have I become immune to inspirational stories?

Listening to the thoughtful voice of astronaut Michael Collins narrate the landing story, my mind was full of one blaring thought: all of the money spent on the project and all the money that has been and will be spent on space exploration in general. Don’t get me wrong. I intellectually get the benefits of exploration and of science. Truly.

But I am in the business of ending homelessness, and I have been doing it for decades. Yes, I should have these feelings for our military budget, for bank bailouts, etc. — and believe me, I do. But this sardonic feeling directed at space exploration was new to me.

And had me questioning myself. Or maybe I am just becoming clearer.

Over 550,000 people — living breathing people — are experiencing homelessness in our country. Children, parents, brothers, sisters, veterans, friends and neighbors. It is one of the most thoroughly researched social problems in history. We have firmly concluded, beyond a reasonable doubt, that the solution is — wait for it — housing and supportive services that match the needs of people. That’s right, we have the solution.

Housing and supportive services cost money, and there is no shortcut. The tragic part of this story is that we are already spending way more money than it would actually cost to end homelessness. As humans, and even as taxpayers, we should be outraged at our misspending. Hospital stays, jail time, police and emergency services, and the industry of shelters we continue to build and finance all add up to billions of more dollars than what housing and services would cost to permanently end homelessness.

Imagine if you broke your arm and the system of care focused on outreaching to you to talk about your feelings about your broken arm, or to review how your arm broke, discuss the role you played in breaking your arm and what you would do differently. Then maybe you would be put on a waiting list for possibly fixing your arm in an unknown amount of time, sometime in the future. But only if you’re lucky. And all the while, your arm is still broken. It is like that. That is what we are doing, still.

In Vermont we have, by the last count, over 1,000 people experiencing homelessness. Maybe that number seems low when you think about the 60,000 people on the streets in the greater Los Angeles area. But if you look at our number in a per-capita way — we are the state with the 10th largest amount of people experiencing homelessness. This is unacceptable.

Finland embraced the Housing First Model and decreased homelessness by 40% with a target to end it by 2027. The Finnish government built 7,000 units of housing. They paid for support services. They converted their shelters into apartments. On Scotland’s government website they have a policy page called “More Homes” that states, “We are working to increase the number of homes across Scotland so that everyone has a good quality home that they can afford and that meets their needs. We will spend over 3.3 billion euro to deliver at least 50,000 affordable homes for which 35,000 will be for social rent, by March 2021.” And Scotland is investing 6.5 billion euros in Housing First services.

In the U.S., we have seen a significant drop in homelessness for veterans. Some say 50% decrease since 2010. How did we do that? There was no magic here. More and sustained resources were, and continue to be, targeted at this population. And the results show that it is working.

This is what “fixing a broken arm” looks like.

We need to invest more and sustained resources for housing and support services for those still experiencing homelessness in our country. It is maybe not nearly as exciting as space travel, but we are talking about human lives and basic human needs. And we are talking about making sound fiscal decisions.

We are the country that had the ingenuity, drive, and resources to manifest a person walking on the moon. There is no stopping us when we set our goals and provide the resources necessary. Let’s shoot for the moon again. Let’s set our sights on ending homelessness.